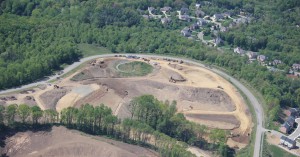 RIDC is pleased to announce the sale of 9.04 acres in Innovation Ridge located in Marshall Township, Allegheny County.  The parcel, which closed August 5, was sold for $1,850,000 to Innovation Center Associates, LP.

The sale was aided by site preparation work that RIDC is currently undertaking.  The work, which started in March and is currently finishing up, is preparing 26 acres of land to facilitate private development in the park. This current sale is expected to jump start the project that RIDC stepped in to revive in 2010.

Innovation Center Associates plans to build a 75,000 square foot speculative corporate office building. The park is being developed with a focus on advanced technology companies and corporate headquarters. Don Smith, Jr., President of RIDC, notes that “this is the latest example of RIDC providing opportunities for corporate R&D and tech companies in our region.”

Innovation Ridge has made several improvements to the off-site transportation infrastructure in the Warrendale area, with additional investments planned, including widening of Warrendale-Bayne road and upgrading the interchange with Route 19.  The transportation and infrastructure improvements were funded and supported by the Commonwealth of Pennsylvania, represented by State Senator Randy Vulakovich and State Speaker of the House Mike Turzai, as well as Allegheny County, and Marshall Township. “It’s great to see positive development and job growth in our area,” said Speaker Turzai.

Innovation Ridge is progressing towards becoming an ideal place for professionals to live, work, and play. The park was developed with strong environmental preservation goals – nearly 50% of the land has been set aside for conservation, forested and landscaped areas, and open space.  The grading plan preserves wetlands and slopes.  And in 2012, RIDC constructed a recreational trail through the site to connect to the larger trail network in Marshall Township.  The Village at Marshall Ridge, a development of executive townhouses by Ryan Homes, was constructed on a nearby section. 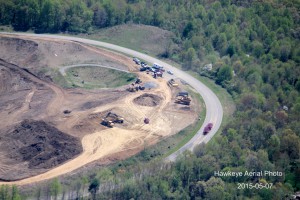 Tim White, Senior VP of RIDC, adds “the work to bring pad ready sites to the I-79 corridor is a sometimes overlooked but essential part of continuing regional growth.”