After more than a decade of investment to foster a robotics cluster in Lawrenceville, RIDC has broken ground on another facility designed to accommodate robotics companies, The Tech Forge. 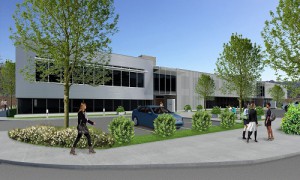 RIDC has been creating flexible space for growing companies who want to be in a central location and in close proximity to Carnegie Mellon University’s National Robotics Engineering Center (NREC).  At least 14 robotics companies are located within a mile radius of NREC.

The building is the latest in a series of investments RIDC has undertaken to spur the robotics and high-tech cluster in the neighborhood.  RIDC renovated the Geoffrey Boehm Chocolate Factory on 43rd Street in 2004 into a multi-occupancy high-tech office and 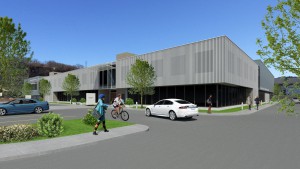 manufacturing facility.  In 2007, RIDC demolished the dilapidated industrial structures on the former Heppenstall Steel site along Hatfield Street then worked to remediate the brownfield for reuse and new investment.

RIDC robotics tenants past and present in the neighborhood include Seegrid, RedZone Robotics, Carnegie Robotics, Caterpillar, and Uber.

The new 64,500 square foot Tech Forge on 47th Street and Plum Way in Lawrenceville will feature a flexible mix of office and high-bay space; high-quality design that is LEED Platinum equivalent; and tenant amenities such as bike and car parking and a roof-top deck.  Desmone Architects in Lawrenceville served as the architect and Franjo Construction from Homestead is the general contractor.

RIDC has also leveraged its projects to increase young students interest in robotics careers by partnering with STEM programs at local schools in Lawrenceville. The Tech Forge project is projecting the creation of over 130 permanent and 60 construction jobs in Lawrenceville.

“This project will be an economic driver for the Lawrenceville neighborhood and beyond. 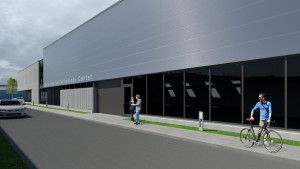 The jobs and vitality it will bring are important for the revitalization of this area of Pittsburgh and U.S. Bank is proud to be a part of the funding to make it happen,” said Jennifer Westerbeck, vice president of U.S. Bancorp Community Development Corporation, the division of U.S. Bank that provided the tax credit equity for the project.

Check the articles below for additional information from other media outlets!