The Almono site in Hazelwood, a 178-acre former coke works site, was host to 25 bands on September 25&26.  The concert was located alongside a large former Mill building with views of downtown and Oakland.  As quoted in the Pittsburgh Post-Gazette, “Years from now people might not remember who played the third annual Thrival Festival, but they’re never going to forget the place.” 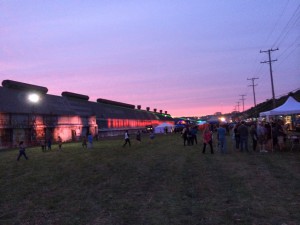 Over 11,000 people attended the 2-day festival, the capstone event of a week of Thrival Innovation events throughout the City.  RIDC took over 100 people on tours through the Mill 19 building.  The neighborhood of Hazelwood welcomed the festival with open arms, acting as site staff, food vendors, volunteers, and proud concert attendees.

The Festival was a great opportunity to highlight the recent progress on site — including a new road construction project set to start at the end of October.

Thanks to the Thrival team who put on a great event!