Groundbreaking for the Hazelwood Complete Street in Almono

ALMONO announced groundbreaking for the first major construction project at the Hazelwood development that was held Friday, October 30 at 11:00 am near the intersection of Hazelwood Ave and Old Second Avenue. The $27 million 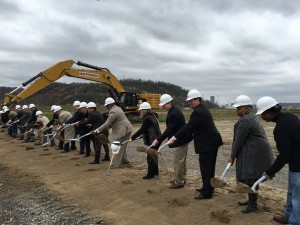 construction of the Phase 1 infrastructure will provide a new riverfront complete street in the City of Pittsburgh and catalyze the entire site for redevelopment. The project sets the tone for a world class development that is highly sustainable, walkable and activates urban places.

The complete street will include utilities and act as a transportation link to connect the site with regional economic centers in Oakland and Downtown. The street will be a mile-and-a-half long and include motor vehicle lanes, parking lanes, sidewalks, a cycle track with porous pavement as well as new storm sewers, water lines, advanced stormwater facilities, fiber optic, telecommunication, electric, and other utility lines.

RIDC Senior Vice President Tim White, lauded the complete street as the first of its kind in 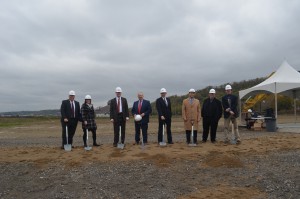 The entire 178-acre site will catalyze over $1.1 billion of investment within the Hazelwood community and the development of 5.7 million square feet of light industrial, office, small retail, R&D, hotel, residential and community space. The site will be the location of over 6,000 permanent jobs – with a range of skill levels – at full build-out. Don Smith, President of RIDC, expressed that the site will be an economic engine not only for the local community and the City of Pittsburgh, but for the entire region and the Commonwealth.

The ALMONO partnership expects to follow the Phase 1 Infrastructure project with the implementation of the Phase 1 Development plan early next year, which will include 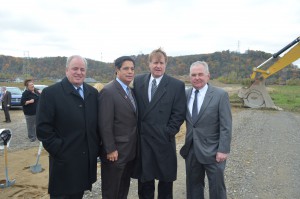 request for proposals (RFPs) to developers for specific parcels.

Links to the event: http://www.wtae.com/news/groundbreaking-for-new-multimilliondollar-development-happening-at-hazelwood-mill-site/36144406