RIDC conveyed the first property 498-P-1 to North Fayette Township.  This property is almost 17 acres and parallels Montour Run Stream from near Enlow Road to Summit Park Drive.  A storm water retention facility is located on the property which will be maintained by the Township in accordance with an agreement with RIDC.  The facility holds storm water from the portion of RIDC Park that is located in North Fayette Township.  The township will use the site to access the facility and to maintain a sanitary sewer line that serves North Fayette and Findlay Townships.

RIDC conveyed the second property 497-A-8 to the Montour Trail Council (MTC).  This property is over 12 acres and parallels Enlow Road.  In addition to working with North Fayette Township on the public trail the MTC hopes to build a much needed facility for Montour Trail maintenance. This Montour Trail Westerner Corridor facility will be planned to have appeasing aesthetics and screening on the green space property.  “RIDC supports the expansion of trail connections to enhance bike and pedestrian access” stated Tim White, SVP Development, RIDC.

The main line of the Montour Trail extends 47 1/2 miles from Coraopolis to Clairton, through the western and southern suburbs of Pittsburgh. Active trail construction projects include an extension into Coraopolis and a section in South Park Township. Trail maintenance is performed by volunteers, so the long-planned western maintenance facility will allow them to maintain nearby trail sections to Montour Trail’s high standards. 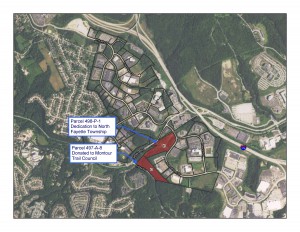