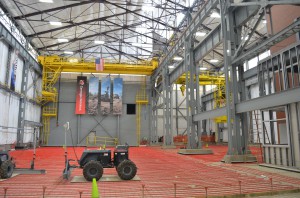 In 2014 RIDC started building out the former Heppenstall building, which is a 30,000 square-foot former industrial high-bay facility.  The building is now a state-of-the-art space for Carnegie Robotics, a spin-out of the nearby Carnegie Robotics National Center (NREC).  Much of the build-out, which totaled $3 million, was financed and managed by RIDC.  The space features mezzanine office as well as manufacturing space.